Reliance Industries Ltd (RIL), the Company owned by Mr. Mukesh Ambani can no longer be called an oil company.

At the risk of sounding atrociously ambitious, I look at it as the Berkshire Hathaway of India.

What is a Conglomerate Discount?

Well, it is basically a concept whereby a sum of parts is valued less than the individual parts in isolation, a situation where 2+2 does not add up to be 4. It is either 3 or 3.5 based on the specific entity we are valuing.

While you are making your investment in a company, think of the stock market as a pool of startups trying to get a share of your hard-earned money and think of yourself as a big shot Venture Capitalist, maybe the MD of Sequoia.

There are only two things you would see if you were making the investment:

Reliance Industries Ltd currently has interests in oil exploration and refining, Fuel Retail, Media, Retail, Telecommunication, and is now trying its shoes to get into e-commerce.

The company also has plans to get into infrastructure (construction of smart cities and pod taxis).

While a lot of discussions have happened on its capabilities in oil exploration and petrochemicals, my focus will be on the huge value lying unlocked within the company in its retail business.

Before getting into the focus on the Retail and Data play of Reliance Industries Ltd and how they have managed to make a pivot for the next decade or probably the next century, let’s take a moment to acknowledge their history.

This history is important to summarize the RIL playbook.

A simple reading of RIL’s Annual Report will tell you something probably most of you would not be aware of.

The company has an exclusive brand partnerships in Retail with the following brands, apart from its own household names of Digital, Fresh, Footprint, etc.

In fact, it’s now being reported that Reliance Brands, the subsidiary which holds the right to these brands, has been told to stop supplying inventory to third parties, so it can exclusively sell those products on its own platform.

Suddenly, after Jio a sight like this is not rare to find.

Enter Jio, and data is now being given to people at 1.5GB / Day and people feel they still need more. There has been a paradigm shift in how we are consuming mobile data.

Here’s a small anecdotal gem I came across on YouTube of Mr. Gupta interviewing Mr. Ambani back in 2003.

The guy had a simple vision to bring down the cost of telecommunication by 100% – simple.

It took him 14 years to finally achieve it and launch it – he made it very sure, that the company delivered. “Focus on the ultimate consumer and things will follow.”

Although I hate the attitude with which Shekhar Gupta talks to anyone in the Walk The Talk series, definitely worth a watch.

“Over the past five years, Reliance Industries Ltd has invested $1.2 billion (acquisitions less than $1 billion) to build capabilities across the various businesses.

While Reveries offers multilingual language support, EasyGov is in the e-governance space and Sankhya Sutra is into industrial fluid dynamics.

So, Jio first had the telecom network, and then the device and its advertising ecosystem. Now, the company is building the consumer-facing software base with the likes of Reverie and Haptik.” – Media articles

Mukesh Ambani buying Hamleys should not be looked at as an acquisition of a Toys Company.

While Hamleys gives Mukesh Bhai the missing piece of his retail puzzle to give an end to end experience to the consumers, let’s not forget what Hamleys can potentially do for Reliance.

Hamleys gives Reliance an unparalleled Real Estate access to all high streets of the world, globally at a throwaway price since the company was incurring losses.

The speed at which Reliance Industries Ltd is taking action in deciding on various key business parameters right from acquisition to running a store is groundbreaking.

I still remember, being a resident of Kolkata, the tip of the park Street having a deserted branch of the Standard Chartered Bank which eventually closed down.

What I hear from the grapevine is, once Reliance set its eyes on that spot, they had a store up and running within a month.

More than just the toys, it’s more of a play on their retail assets.

Who knows, maybe we’ll see Reliance Fresh open up in every corner of the world?

Looking beyond the Obvious

Or from a host of other things you would have heard.

In the iconic AGM that concluded in 2019 where a host of measures from Saudi Aramco Deal to Reliance Retail was announced, there was something else that was a part of the announcement.

Opening of data centers throughout the country in partnership with Microsoft.

The government has been pushing really hard for various tech companies to localize their data storage within India.

Where do you think all this data is going to be stored?

Reliance Industries Ltd has been heavily investing in CAPEX for quite some time and as a prudent investor, I cannot ignore the fact that the Free Cash Flows of Reliance (Cash Flow from Operations – Capex) has been negative for the past three years.

This is a serious red flag in any back of the envelope simple valuation model.

As a matter of fact, as early as on 16th April, Reliance Industries Ltd has gone for another debt raise of ~ Rs. 8,500 cr.

People keep questioning the idea of diversification and analysts always have a shadow of doubt around it w.r.t. lack of focus and resources.

This again gives a steep ‘conglomerate discount’ to the overall valuation of the firm but something magical has happened with the Facebook deal.

While there were tremendous concerns w.r.t. debt and future profitability of core businesses, the first level of value unlocking has come from the Facebook Deal.

The overall market capitalization of RIL as of 24th April is USD 118 Billion. With a debt of ~USD 33 billion on the balance sheet as of September 2019, Reliance Industries Ltd commands an Enterprise Value of USD 151 billion.

At total sales of USD 86 billion, Reliance Industries Ltd roughly has a valuation multiple of 1.8x to Revenue at a group level.

This is the power of value unlocking that is often under-appreciated with conglomerates or companies with hidden assets lying in their balance sheets.

What this basically means is that Jio Platforms is valued at 57% of the total market cap of Reliance Industries Ltd while its Revenues are a mere 8% of the total Revenues (~USD 7 billion).

This indeed gives a breather to RIL w.r.t. offloading debt and tremendous validation to its ambitious plans that it got on 10 years ago.

While there were big concerns surrounding the future of oil, Reliance Industries Ltd has found an answer in its new oil, Jio.

To quote Mukesh Bhai from the iconic AGM,

Data is the new oil

While this deal has certainly raised a lot of eyebrows w.r.t. data privacy concerns, it will be interesting to see how the deal closes.

On one hand, you have a global data giant making it’s the second attempt in India for mass scale reach after the failed attempt of Free Basics, on the other hand, you have an Indian grown Data behemoth that has truly transformed how we consume data.

Will India finally get a data protection law amidst this deal?

Will we see a super-app that integrates WhatsApp, Facebook, JioMart, and a host of other suites of products?

We will have to wait to find out.

One thing is for sure, this deal will set the benchmark for all major tech deals in this country.

On the liability side, 76% is Shareholders’ Equity which is phenomenal and shouldn’t be surprising considering the behemoth FB is.

On the asset side, FB sits on close to 60 Bn of Cash (Cash Equivalents + Marketable securities) i.e. ~44% of the Asset side.

It shouldn’t come as a surprise that FB is desperate to get acquisitions done.

What is also interesting is they also have close to USD 19 Bn recognized as Goodwill.

Committing USD 6 Bn to the Jio Platforms deal, FB still has a war chest of USD 54 Bn to take ahead.

While FB has not necessarily engaged in unnecessary inorganic expansion and been very prudent with acquisitions, the cash may have to be put to good use.

Except for buybacks, dividends, and inorganic expansions, can we see something else?

Or will the cash sit?

With the Facebook deal, Reliance Industries Ltd has just demonstrated what is the level of value unlocking it is capable of achieving.

The next wave shall come once the Retail assets are unlocked. With the Facebook deal, Reliance Industries Ltd aims to achieve ambitious goals around retail w.r.t. connecting the Kirana stores into the larger value chain of things.

While their existing retail assets have been performing brilliantly compared to its listed peers, we might just get to see another level of value unlocking with the retail play.

While the Reliance Industries Ltd Jio Platforms and the energy business has got a market defined Enterprise Value (PE deals and Saudi Aramco interest respectively), the Retail business is yet to receive a market defined valuation (the company has expressed interests to unlock value in the 2019 AGM).

Taking a very conservative approach and using half the Revenue multiple for D-Mart at 2.8x, the Retail business can be conservatively valued at USD 59 Bn. (Grey market premiums in the unlisted markets are much, much higher than this.)

Reliance Industries Ltd with Jiomart is also going after the unorganized retail which is 6 times bigger opportunity (estimated market size of USD 1.2 Tn+)

This valuation exercise has been purely done from an academic standpoint and should not be construed as investment advice. Readers are requested to do their own due diligence before investing.

Some of the data used for the valuation exercise above has been sourced from an infographic (below) and Screener.in 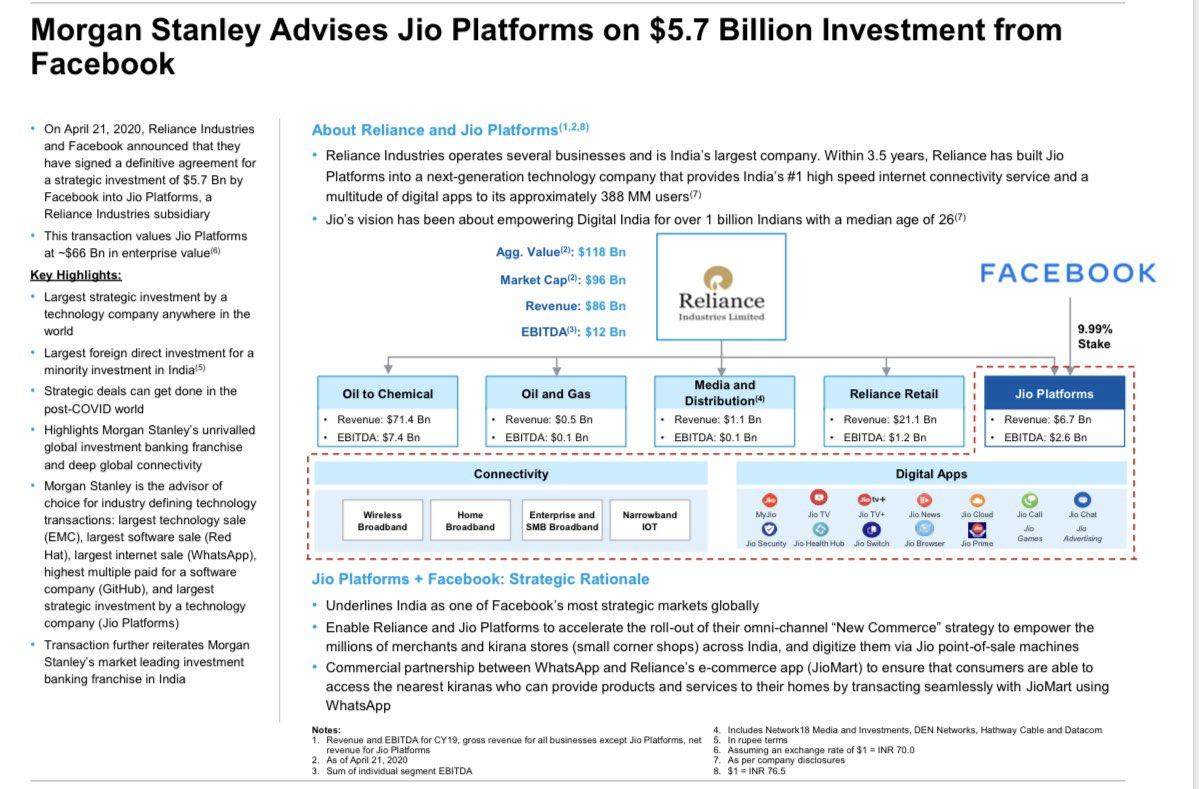 Read Part – II of this post – What is the Future of Reliance Industries Ltd here.

Fellow reader, what are your thoughts on this? Knowing that Reliance Industries Ltd is going after the next billion-dollar businesses and also seeing the debt concerns on the Balance Sheet, would you be placing your bet on this horse?

Saket is a number cruncher, avid reader, coffee connoisseur, book store hopper & Metallica fan. He is an active follower of Sensex since 2009. CA, CS by profession. View all posts by Saket Mehrotra

FinMedium is a financial web-magazine that publishes the insightful and sharp ideas of the financial thinkers and writers.

Our mission is to help people make wise decisions on the matters that matter the most – Finances.

The blog posts on FinMedium must not be construed as an investment advice either from FinMedium or Author.