India Grid Investment Trust: To Trust or Not to Trust

India Grid Investment Trust: To Trust or Not to Trust

This post has been written by Khubaib Abdullah for FinMedium Research Desk.

There are no better words to describe India Grid Investment Trust, an SPV company, that is in the business of acquiring assets in a very segmented industry, operating, running and maintaining them; and lastly providing greatest possible benefits to the unitholders.

Sterlite Power Grid Ventures Limited is one of the leading independent power transmission companies operating in the private sector.

The trust acquires and runs interstate electricity power plants. Of the 12 inter-state power transmission projects developed by the Sterlite (on of the Principal Sponsors), India Grid Investment Trust has acquired seven projects with a total network of eight power transmission lines of more than 4,900ckms and four substations having 7,735 MVA of transformation capacity across eleven states.

As part of acquiring third-party transmission assets, Patran Transmission Company Limited (“PTCL”) from Techno Electric & Engineering Company Ltd. (“TEECL”) on August 31, 2018, with one substation having 1,000 MVA of transmission capacity in Punjab has been acquired.

Each of these 8 Portfolio Assets have been completed and revenue-generating for more than a year. These Portfolio Assets were awarded (through its subsidiaries) under the ‘tariff-based competitive bidding’ mechanism (“TBCB”) on a ‘build-own-operate-maintain’ (“BOOM”) basis for India Grid Investment Trust. 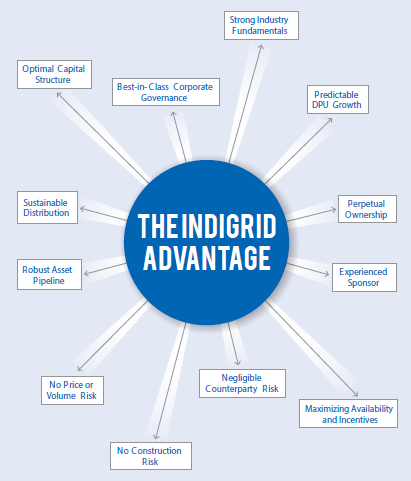 India’s tremendous growth in renewable energy capacity puts the nation on a clear and achievable path towards its renewable energy target of 450 gigawatts by 2030. The total return, which includes the distribution made to date as well as the change in unit price, is 34%.

India Grid Investment Trust owns and operates 11 electricity transmission lines and other such plants that transmit power across 12 states and 1 UT. All the 11 plants are shown in the image below. The company further intends to add 1 more plant to its portfolio in 2021.

On the nation Wide Lockdown’s effect on business:

“IndiGrid and especially its asset management teams have been up to the task during this period and have been instrumental in ensuring safe operations of the asset portfolio and the national grid without disruption.

During the lockdown period, not only have we focused on maintaining the highest levels of availability, but we have also focused on growing the underlying asset portfolio.”

On the Past Financial Year’s meteoric expansion:

“The financial year under review has been transformational for IndiGrid. We have almost doubled our market capitalisation over the last three years to approx INR 60 billion currently on the back of our successful follow-on equity raise worth INR 25 billion in May 2019.

As part of this transaction, Sterlite Investment Managers Limited or the investment manager of IndiGrid is now majorly owned by KKR.”

On expanding into other sectors:

“As a part of our growth strategy, we are moving a step ahead by diversifying into renewables and exploring solar power assets. This diversification will be substantially yield-accretive, and is

expected to provide predictable and growing distribution to the investors, besides having good synergies with our business model.”

On the returns for the unitholders:

“Our total return, which includes the distribution made to date as well as the change in unit price, is 34%. This is substantially higher than that of G-sec and other comparable indices such as NSE Infra, BSE Capital Goods, and NSE 500 when tracked since our listing date.

On Future Prospects of the Trust:

“As we look into the future from here on, we see immense opportunity for IndiGrid. To achieve a GDP of USD 5 trillion by FY 2024-25, India needs to spend about USD 1.4 trillion or INR 105

trillion over the next five years on infrastructure. Banks and non-banking financial institutions, already battling asset-liability mismatches and bad loans, cannot be solely relied upon for this investment.

Meanwhile, infrastructure developers need to monetize their operational assets efficiently and churn the capital to invest in the construction of new assets. IndiGrid, being the first power InvIT, is well-positioned to seize this massive potential opportunity.

Over the last three years, the underlying performance has been robust and with our equity fundraise, we remain well capitalized to grow faster than ever before.

With planned acquisitions ahead, we have strong visibility of an asset portfolio of INR 180 billion over the next two years, which is more than fivefold our AUM size at the time of listing.”

Also Read on FinMedium:  How MMI can help in timing your investments better 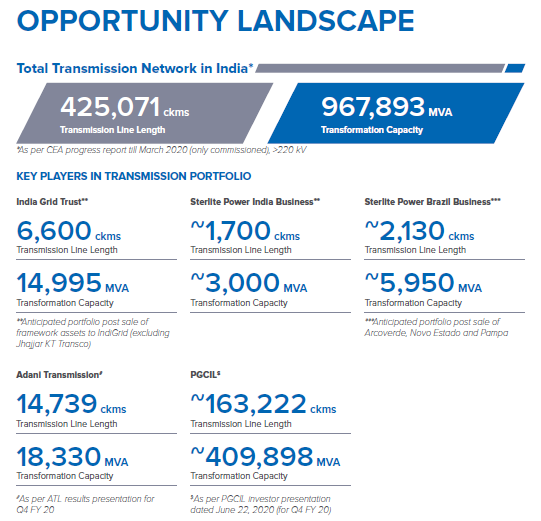 Power is among the most critical component of infrastructure, crucial for the economic growth and welfare of nations.

The existence and development of adequate infrastructure are essential for the sustained growth of the Indian economy.

In May 2018, India ranked fourth in the Asia Pacific region out of 25 nations on an index that measured their overall power.

India was ranked fourth in wind power, fifth in solar power, and fifth in renewable power installed capacity as of 2018. India ranked sixth in the list of countries to make significant investments in clean energy at US$ 90 billion.

The Indian power sector is undergoing a significant change that has redefined the industry outlook. Sustained economic growth continues to drive electricity demand in India.

The Government of India’s focus on attaining ‘Power for all’ has accelerated capacity addition in the country. At the same time, the competitive intensity is increasing at both the market and supply sides (fuel, logistics, finances, and manpower).

By 2022, solar energy is estimated to contribute 114 GW, followed by 67 GW from wind power and 15 GW from biomass and hydropower. The target for renewable energy has been increased to 227 GW by 2022.

The Government of India has released its roadmap to achieve 227 GW capacity in renewable energy (including 114 GW of solar power and 67 GW of wind power) by 2022. The Union Government of India is preparing a ‘rent a roof’ policy for supporting its target of generating 40 gigawatts (GW) of power through solar rooftop projects by 2022.

Coal-based power-generation capacity in India, which currently stands at 199.5 GW, is expected to witness total installed capacity addition of 47.86 GW by 2022.

The trust’s revenues grew by 86% YoY and more than doubled its asset base over the year. The borrowing of the firm has swollen to by 140%. Capital has also been raised by selling the units to marquee investors such as the Fund of the Government of Singapore and Schroder Asian Asset Income Fund.

This has managed to bring the total asset count in the portfolio of the firm to 10. Going ahead, the Trust plans to acquire more plants in the future.

Future Trends in the Industry

The past few years have passed with a lot of uncertainty for the power generation industry. While most players chose to stay on the sidelines, the India Grid Trust has been actively mopping up AAA-rated assets from all over the country. While it is difficult to know with certainty what the future brings with itself, there are certain possibilities more probable than others. 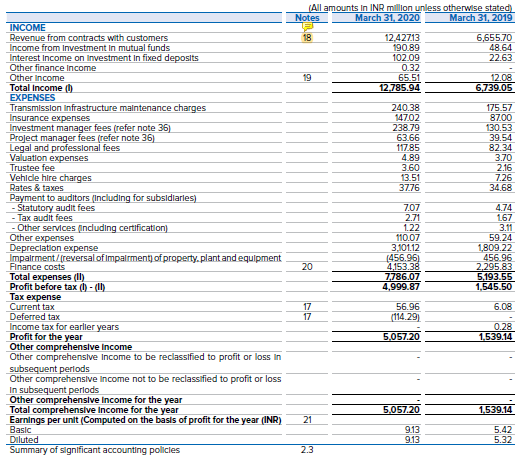 The fund flow analysis of India Grid Investment Trust has been attached herein.

While the OPM and NPM were of similar levels in 2018 and 2020, there was a steep fall in 2018. This was because of the debt repayments that the trust had to make.

These numbers are expected to stay consistent in the future to come and may even improve as the newly acquired assets start to churn out profits.

The interest coverage ratio tells us how much profit a company makes compared to every Rs 1 of interest it is obligated to pay. Anything above 3 is considered to be a good number.

In our case, the ratio took a slight dip in 2019. The DE ratio record how has the company been funded, using debt or equity or both.

This is number must be close to 1, which means that the amount of debt and equity the same. The ratio breached 1, despite the fact the company increased its borrowings greatly this year. This has been fueled by the stake pick up by KKR.

Current Ratio measures the ability of a company to meet its daily working capital requirements. It must be more than 1 so that the company has enough assets to meet its current liabilities.

The ratio in the trust’s case has been slowly gaining strength and has breached 1 in 2020.

India Grid Investment Trust has a dividends yield of 10%. The best way to compare this number using the Graham Dodd’s test of the Bond Yield.

A stock must pay in dividends more than what government security would pay over similar periods. The difference is the Margin of Safety for the stock.

This metric is especially useful in the case of an investment trust as it is obligated to pay dividends at fixed intervals of time. The current GSec yield in India is around 5.7%, while the stock has a Dividend Yield of around 10%. The difference of 4.3% acts as good Margin of Safety.

India Grid Investment Trust is rather unseen before kind of venture in India. It is a unique SPV, which intends to benefit from acquiring high-grade AAA power generation projects and transmission lines.

It is also obligated to distribute 90% of its cash holdings to its unitholders (the obligation to deliver dividends to the unitholders as well as 1 unit equating to 1 vote on the board makes it a rather different sort of an instrument which is not exactly a share nor exactly a bond, but combines some features of them both, hence the word unit is used).

The idea behind this is to consolidate the highly segmented power generation industry of India and generate quality dividends alongside. This makes it an enticing stock.

However, apart from the risks that the trust faces due to operating in the Power generation business, it also has to meet these dividend payments each quarter. In the last year, India Grid Investment Trust distributed more than its actually made, by way of debt and equity that it has raised recently.

This, not a particularly exciting proposition, as the capital or debt, does not really last forever.

Meeting dividend payments using debt is not a new feature in India, several companies do it all the time, but they have to eventually pay up in the longer run, no matter how sweet the dividends may feel now.

These “assured” dividends are absolutely assured throughout the next year, as the company will continue to get more capital from its investors, will have not debt repayment and has a tax shield.

The real test lies after 2021 when the capital steam will dry up and the trust will have no option but to perform and deliver.

Barring this, India Grid Investment Trust seems to have no other underlying financial issue and is a decent stock to own. 2021 will witness quite a lot of stock price appreciation as well as better dividends. The stock is not very volatile either.

However, as Ray Bradbury has said:

“Insanity is relative. It depends on who has who locked in what cage.”.

So only the future will reveal the reality.

This post has been written by Khubaib Abdullah for FinMedium Research Desk.

Read our research and analysis on Sectors, Companies, Investing Ideas, and other cool financial stuff. All from our in-house Research Desk.

Forensic Accounting by Amey Kulkarni Coupon Code = FINMEDIUM for 10% OFF!